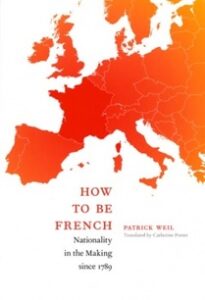 Patrick Weil, « How to be French. Nationality in the Making, since 1789 » translated by Catherine Porter, Alec G. Hargreaves, Journal of Interdisciplinary History, Volume 40, Number 4, Spring 2010 pp. 597-598

Weil’s book, deftly translated by Catherine Porter, constitutes not only the definitive work on the history of French nationality laws but also a study that by any standards ranks as an outstanding piece of scholarship. Built on extensive archival work and encyclopedic knowledge of its subject matter, the book combines an often gripping history of French nationality laws with revealing comparative analyses referencing other Western states and a wealth of information in its appendixes that offers ready access to virtually every aspect of the subject.

Although the details of nationality laws tend to be dry reading, their impact on individual human beings can be immense—opening rights of citizenship or raising threats of deportation and, in extreme cases, representing the difference between life and death. Weil succeeds in covering both the technical and the deeply human aspects by illustrating the effects of nationality laws through judiciously chosen case histories that provide revealing insights into key issues and trends. He is also exemplary in his handling of the explosive ideological charge that sometimes attaches to the politics of nationality laws, most notably during the occupation period, when the Vichy regime stripped thousands of Jews of French nationality, preparing the way for their deportation to Nazi death camps. Weil recounts these and more recent events relating to Muslims with remarkable restraint, allowing such civil servants and politicians as Georges Mauco and Valéry Giscard d’Estaing to hang themselves, in effect, with their own racist or quasiracist words, which he quotes from public and archival records to devastating effect.

The book is divided into three main parts, of which the first two trace the evolution of French nationality laws from the end of the ancien régime to the present time. Part 3 is framed in more thematic terms: In Chapter 7, Weil provides a valuable corrective to stereotypical images opposing France’s so-called « republican » tradition to an « ethnic » model associated with Germany. In Chapter 8, he reviews the ways in which certain groups—women, colonial subjects, and naturalized persons—have been denied full citizenship while holding the formal status of French nationals. In Chapter 9, he offers a synthesis of current nationality laws and their administrative operation. Although the book might have benefited from a more extended theoretical discussion of the relationship between nationality and citizenship—drawing on such notions as Hammar’s concept of denizenship and Bauböck’s distinction between nominal membership and substantial citizenship to help more clearly grade and categorize the forms of discrimination discussed in Chapter 8—this invaluable study is certain to remain the standard work on the subject for many years to come.