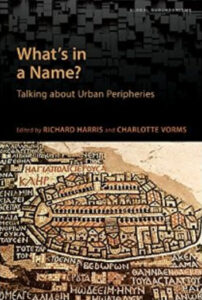 ‘Borgata’, ‘favela’, ‘périurbain’, and ‘suburb’ are but a few of the different terms used throughout the world that refer specifically to communities that develop on the periphery of urban centres.

In What’s in a Name? editors Richard Harris and Charlotte Vorms have gathered together experts from around the world in order to provide a truly global framework for the study of the urban periphery. Rather than view these distinct communities through the lens of the western notion of urban sprawl, the contributors focus on the variety of everyday terms that are used, together with their connotations. This volume explores the local terminology used in cities such as Beijing, Bucharest, Montreal, Mumbai, Rio de Janeiro, Rome, Sofia, as well as more broadly across North America, Australia, Southeast Asia, and elsewhere. What’s in a Name? is the first book in English to pay serious and sustained attention to the naming of the urban periphery worldwide. By exploring the ways in which local individuals speak about the urban periphery Harris and Vorms bridge the assumed divide between the global North and the global South.