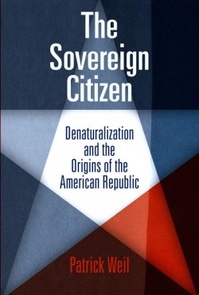 Patrick Weil, The Sovereign Citizen. Denaturalization and the Origins of the American Republic (Democracy, Citizenship, and Constitutionalism), University of Pennsylvania Press, 2012, 286 p.

Present-day Americans feel secure in their citizenship: they are free to speak up for any cause, oppose their government, marry a person of any background, and live where they choose — at home or abroad. Denaturalization and denationalization are more often associated with twentieth-century authoritarian regimes. But there was a time when American-born and naturalized foreign-born individuals in the United States could be deprived of their citizenship and its associated rights. Patrick Weil examines the twentieth-century legal procedures, causes, and enforcement of denaturalization to illuminate an important but neglected dimension of Americans’ understanding of sovereignty and federal authority: a citizen is defined, in part, by the parameters that could be used to revoke that same citizenship.
The Sovereign Citizen begins with the Naturalization Act of 1906, which was intended to prevent realization of citizenship through fraudulent or illegal means. Denaturalization — a process provided for by one clause of the act — became the main instrument for the transfer of naturalization authority from states and local courts to the federal government. Alongside the federalization of naturalization, a conditionality of citizenship emerged: for the first half of the twentieth century, naturalized individuals could be stripped of their citizenship not only for fraud but also for affiliations with activities or organizations that were perceived as un-American. (Emma Goldman’s case was the first and perhaps best-known denaturalization on political grounds, in 1909.) By midcentury the Supreme Court was fiercely debating cases and challenged the constitutionality of denaturalization and denationalization. This internal battle lasted almost thirty years. The Warren Court’s eventual decision to uphold the sovereignty of the citizen — not the state — secures our national order to this day. Weil’s account of this transformation, and the political battles fought by its advocates and critics, reshapes our understanding of American citizenship.