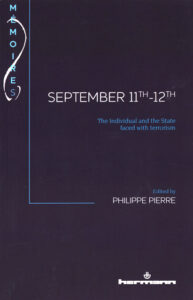 Among the commemorations that marked the tenth anniversary of the terrorist attacks of September 11th was held the conference « September 11th-12th, the Individual and the State Faced with Terrorism » (French Embassady in Washington DC). This new trans-Atlantic chapter of the program « Memory and Memorialization » was original in three ways.

– A transdisciplinary approach, calling to speak specialists in neuroscience, psychoanalysis, psychiatry, history, but also legal experts, law historians, even political science and public policy specialists;
– a approach at once retrospective and projective: September 11th is calling upon the competence of social as well as legal historians and the experience of psychological development of trauma specialists;
– A approach with a growing focus: the personal construction of the victim, whose trauma